When someone enters your personal space it can be an awkward feeling and you’ll probably want to know why they’re doing it.

This post will help you to figure out why someone might do it and to help you to make better sense of it if it happens again in the future.

When trying to figure out why someone might be standing in your personal space it’s important to consider other body language signals that they are showing. It also helps to consider the environment, how they interact with others and how much personal space their culture normally has.

What it means when someone stands in your personal space

Below, I will mention a number of reasons that someone might stand in your personal space and I will mention body language signals that you should expect to go with them.

One reason that someone might stand in your personal space is that they are attracted to you.

If this is the case then they will likely show a number of other body language signals that would suggest attraction.

You might not have thought it but the lower body is actually one of the most reliable body parts to look at. People learn ways to hide their emotions on their face but they rarely think about what their feet and legs might be suggesting.

When we find people attractive you will often find that we point our feet towards them and that we lean our lower bodies in their direction. If you notice that the person that entered your personal space usually has their feet and lower body pointing towards you then it would suggest that they are attracted to you.

If they are attracted to you then you will likely find that they give a number of micro-gestures when they first see you and a smile is one of them. When they smile or laugh with you they will be more likely to be genuine where they open the mouth and wrinkle slightly next to the eyes.

When we are attracted to people we will often touch them more or find excuses to touch them more. If you find that they tend to touch you more than others then that would be a sign that they find you attractive.

There are a number of signs that a person might show with their eyes when they are around someone that they are attracted to.

When we are around people we find attractive it can actually cause our pupils to dilate more than usual. This means that if you notice that the person that stands in your personal space tends to have more dilated pupils around you then it would suggest that they find you attractive.

When we are developing feelings for people we will also begin to hold our gaze with them for longer. So, if you notice that they tend to hold their gaze with you when talking to you then that would also suggest that they are attracted to you.

You might also find that they tend to give lots of glances in your direction and you might even catch them looking at you often where they look away as soon as you notice. They might also tend to look at you when they are laughing.

One reason that someone might enter your personal space could be that they are being aggressive.

They would do this because their intention would be to intimidate you and to make you submit in order to avoid conflict.

If this is the reason that the person has entered your personal space then you would likely instinctively know but there are a number of body language signals to look for.

When people are trying to intimidate others they will talk in a deeper voice and they will often talk loudly or even shout.

When people are trying to intimidate others their eyes will often constrict and they will squint slightly when looking at the other person. They will also likely hold very hard eye contact and avoid looking down.

Trying to exert their power

It could also be the case that they are standing in your personal space as a way to exert their power over you.

If this is the case, then you’ll likely find that they will try touching you, telling you to do things, they might not take what you say seriously and might talk down to you.

It’s normal for them

It could be that they are from a culture where it is normal for people to talk to each other more closely than you are used to.

If this is the case then they will likely show normal mannerisms and would be more likely to talk that way to everyone else.

When we are with people that we like or we are trying to fit into a new group of people we will often mimic their body language.

In this case, it is likely that they will imitate other aspects of your body language. For example, the might stand with their hands in their pockets if you are or they might cross their legs if you do as well.

Consider how they behave around other people

When trying to figure out why they might be standing in your personal space it would normally be helpful to observe how they talk to other people.

If you notice that they only stand close to you then it would suggest that they are attracted to you or that they see you as “lower” to them and they want to exert their dominance.

Whereas if you notice that they stand close to most people then it would suggest that either they’re from a culture where it is a normal distance or they might have a more dominating personality.

It would also be helpful to consider the environment that they do it in.

If it occurs in a social setting then it will make it more likely that they are doing it due to attraction.

Whereas if it occurs in a business setting then it would make it more likely that they are trying to one-up you and establish themselves as your superior.

Body language signs to look for

Look for behaviors that might signal that they are feeling some kind of anxiety such as rubbing their face, neck, arms or upper legs.

Observe where they tend to look, consider how constricted or dilated their pupils are and look to see if they squint with their eyes or not.

Look to see if they are showing aggressive signs such as pupil constriction, redness of the face, tensing the jaw, hiding the lips, leaning into you, clenching the fists and squinting with the eyes.

Think about where they are from

It’s also important to take into account where the person is from. If they are from a country that has a higher population density then it will cause them to be used to standing closer to people.

How far is considered personal space? The distance at which people will feel comfortable will vary from person to person and from culture to culture. If you’re unsure observe how far groups of friends stand from each other and make sure to give at least that much distance when talking to people yourself. 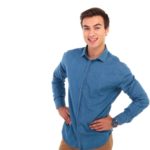 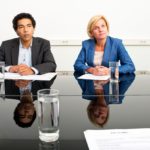 What does it mean when someone copies your body language?