If you recently noticed a guy touching you on your shoulder you might be wondering why he did it and what it might mean.

This post will try to help you figure out why he might have done it and to make sense of it as it happens in the future.

So, what does it mean if a guy touches you on the shoulder? If he’s showing other body language signals of attraction and if he only does it to you it could mean that he is attracted to you. Other possible meanings are that he was dominating, he was mirroring your own behavior or that he’s from a culture where it’s normal behavior.

Since there are a number of possible reasons why a guy might touch you on the shoulder it is important to consider what other aspects of their body language are showing.

By doing so you will be able to get a better understanding of the kind of emotional state that he is in.

Possible meanings of a guy touching your shoulder

There are a number of reasons why a guy might touch you on the shoulder and each of them will likely come with clues in their body language.

Below, I will mention a number of reasons why a guy might touch you on the shoulder and the body language signals to look for.

One reason that a guy might touch you on the shoulder is that he finds you attractive.

If this is the case then it is likely that he would be showing you other signals of attraction in his interactions with you.

When people are with someone that they are attracted to it can actually cause the appearance of their eyes to change.

If the guy was attracted to you then it would be likely that his pupils would be more dilated than usual when talking to you. This is because our pupils dilate more when we are with a person that we are attracted to.

When he wasn’t with you, it would also be a sign of attraction if he was giving a number of glances in your direction. If you noticed him doing it then he may have quickly looked away or smiled when you looked at him.

It would also be likely that, when he is looking at you, he wouldn’t be squinting with the eyes or frowning much.

When talking to you, if he found you attractive, it would be likely that he would have asked you more questions than he did to others. He may also have been giving you more open answers with a tone that encourages you to continue talking.

When talking to you he would also likely have been standing at a closer distance than he normally does when talking to other people.

If he touched you on the shoulder due to attraction then you might also find that he tends to stand in r general area when you’re both with a group of people.

If he was attracted to you then he might also have been standing in a position that shows his crotch such as if he was standing with his hands on his hips.

It has been found that, when men are talking to women that they find attractive, they speak at a deeper pitch. This is likely to be because it highlights that they are in abundance of testosterone.

It has also been found that men will, at times, speak with a higher pitch as well. This could be because they don’t want to come off as dominating and be perceived as a threat.

This means that if he tends to speak to you with a deeper voice than he does to others and he occasionally says things in a higher pitch it would be a signal of attraction.

It could be the case that he is attracted to you but he also gets a bit nervous around you.

If this is the case then it would be likely that he would also show some signs of nervousness when talking to you.

These can include things like rubbing the face, arms, upper legs, neck and ears in order to soothe their nerves and calm themselves down, frequently blinking and also yawning.

When people are trying to control others they will often touch them as a way to show that they have authority over them.

If he did it due to trying to dominate you then he would also have been likely to have been showing other dominating signals in his body language.

When people are attracted to others or when they want to fit in with others they will often begin to copy their body language which is what he might have been doing.

If he was then it would have been likely that you will have touched him on the shoulder at some point yourself.

If he mirrored your touch on the shoulder due to attraction then he would also have likely been showing other signs of attraction mentioned above.

If he was mirroring your behavior then it is likely that he would have shown other signs of mirroring as well.

It could have been the case that he is from a culture where it is normal for them to touch others while talking.

For example, in Italy, they talk with their hands a lot and they will often touch others while talking. They will even hold the other person’s hand down at times to signal that they are talking.

If the guy was from one of these cultures then it will be necessary for you to consider other aspects of his body language to get a better idea of why he did it.

If he was talking in a way that was more emotionally charged or if he was showing signs of shock then this would have been more likely.

Some of those signs could have been

It could also have been the case that he thought you were sad and he was trying to console you.

If that is why he did it then it would have been likely that you were telling him about something that might make you sad and you might have been showing signs of being sad with your body language.

To get your attention

Sometimes people will touch other people on the shoulder to get their attention.

If he did it at the first moment you saw him and he immediately told you something or asked you a question then that might have been why he did it.

Consider Where it happened

When trying to make sense of what a guy’s body language might be saying it is important to think about the location that it happened in.

If the guy touched you on the shoulder in a setting where he has relative authority such as if it was in a business setting and he’s your boss then it would be more likely that he did it to get you to do something.

If he did it in a social setting where you were both alone together it would make it more likely that he did it due to attraction.

Think about his normal body language

Observing the way that he behaves around others and when he is in a normal state of mind would also be helpful in figuring out why he might have touched you on the shoulder.

If he regularly touches other people on the shoulder then it wouldn’t be a strong signal that he touched you on the shoulder for any particular reason when he did it. That is unless he was showing other different body language signals compared to normal.

If he doesn’t normally touch others but he did touch you then it would be a stronger indicator that he did it for some reason such as attraction or consoling you.

Consider the timing of when it happened

Thinking about the timing of when he touched you on the shoulder could also be helpful.

If he did it right away then he could have just been trying to get your attention.

If he did it right after saying a joke then he might have been trying to emphasize the joke or to suggest that he didn’t mean it personally.

If he did it right after you said something then it could have been that he was trying to console you or that he was attracted to you and he considered it an excuse to touch you.

When trying to make sense of aspects of a person’s body language it is important not to consider them in isolation.

It could be that the guy tends to touch everyone on the shoulder. This is why it’s important to consider what he might have been suggesting with multiple parts of his body language.

If a guy touches you on the shoulder in public what does it mean? It signals that either he was attracted to you, he was being dominating, he was trying to emphasize a point or that he was trying to console you.

What does it mean when a guy rests his head on your shoulder? This would signal that he feels comfortable around you. It could suggest that he finds you attractive but it might also be that he considers you a friend. 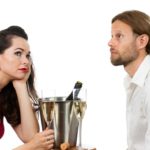