When you see someone standing with their hands behind their back it can be for multiple reasons. This post will try to help you figure out why someone might be doing it and to help you to figure it out in real-time in the future.

There are actually multiple possible reasons that a person might stand with their hands behind their back. The best way to figure out why they might be doing it will be to consider other body signals that they’re showing, the environment and how they normally behave.

Below I will mention reasons why someone might stand with their hands behind their back and I’ll give you some body language signals that you should look for to confirm it.

The most common reason that someone will stand with their hands behind their back is that they are feeling in control and they are happy to show it. This is why it’s common to see police and guards standing in this position.

The position implies that they feel confident because it results in them showing their vital organs. This means that they must be feeling like they are not under threat.

This type of body language will also likely be coupled with having the legs wide apart and they will be standing with a straight back without slouching at the shoulders. They will also often extend the neck slightly to appear bigger. The face will often appear to be expressionless and they will likely talk with a deeper voice.

If something happens that causes them to feel like they are not in control or that gives them some anxiety then they will often leave this position.

Holding back the truth

This type of body language will likely come right after you said something that they disagree with. They will also likely have gone tight-lipped slightly, their pupils may have constricted and they might have momentarily squinted with the eyes.

If a man goes into this position when speaking to a woman then it can actually signal attraction. This is because it shows that he isn’t intimidated by her and it highlights his crotch.

If it is due to attraction then they will likely show a number of other signals that point to attraction. These signals can include dilation of the pupils, pointing their feet towards the woman, speaking with a deeper voice, touching more frequently, mirroring her behaviors, leaning towards her, maintaining prolonged eye contact and giving genuine smiles.

If they’re holding an arm tight behind the back then it would signal frustration.

If this is the case then they may clench the jaw slightly, they will have constricted pupils, they may point their feet away, they’ll have tight or hidden looking lips and they might go more red looking.

When you’re trying to figure out what someone might be feeling like when they have their arms behind their back it can help to look at other body language signals that they are giving.

If the person is doing it because they feel confident then they will likely stand upright without any slouching of the shoulders. They may even push them back slightly to show the chest more and to look bigger.

If their fists are clenched then that would suggest that they are feeling frustrated. In that case, you should look to see if their face is red if there is jaw tension and if their lips are tight.

When we are happy our pupils will dilate slightly and when sad they will constrict. If the person is feeling frustrated you should expect to see that their pupils constrict slightly.

It can also be helpful to consider when they adopted the body position. If they did it after you said something then it could suggest that they are feeling confident about what you said or they may have disagreement if they held their arm back.

Think about their normal behavior

It’s also helpful to think about what their normal behavior looks like. If someone normally stands in that position then it will be harder to draw conclusions about how they might be feeling as it is normal behavior for them. Whereas if they don’t normally stand like that then it would suggest that they are actually feeling more confident than usual in that position. 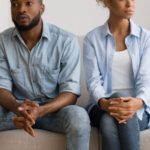 What it means when someone puts their hands in their pockets