If a guy recently tried to hold your hand you are probably wondering why and what it might mean.

So, what does it mean when a guy wants to hold your hand? It could be a sign that he likes you especially if he shows other signs of attraction around you, he only does it with you and if he tends to touch you a lot. He might also be trying to be protective, mirroring your own behavior or trying to console you.

Since there are a number of reasons why a guy might want to hold your hand it is important to consider the context of when he does it and the body language signals that he shows around you.

Possible reasons why a guy will want to hold your hand

Each of the different reasons why a guy will try to hold your hand will likely come with a number of clues in his body language.

Below, I will mention a number of reasons why a guy might try to hold your hand along with the body language signals to look for with it.

If a guy wants to hold your hand it would be a strong sign that he finds you attractive. This would especially be the case if it is only you that he seems to do it with.

If he does find you attractive then it would be likely that he would show it in a number of other ways.

These ways can include:

It could be the case that he wanted to hold your hand because he was trying to be protective.

If this was the case then he would likely have tried to do it in an uncertain environment such as when walking through a crowd.

In this case, his body language would have appeared to be protective and he likely would have been trying to lead you to do something.

Sometimes, when people are trying to make someone feel better, they will put their hands on the other person’s hands.

If, when he held your hand, you were sad and you were showing signs of sadness in your body language then it could be the case that he was trying to make you feel better.

If that is why he did it then it would be more likely that he would have put his hands on top of your hands when you were both sitting down together.

He wants more than just a friendship

If you have both been friends for a while and he didn’t use to try and hold your hands then it could be the case that he wants more than just a friendship.

If this is the case then it would be likely that he has been showing a number of the other signals of attraction mentioned earlier for a while but you just haven’t picked up on them.

It would also be likely that he would show signs of nervousness when around you since he hasn’t been able to ask you out properly yet.

He would also be more likely to show signs of being anxious when you’re around other men of the same age as you and that he gets defensive when other men are around.

He wants to see how you’ll react

It could be the case that he has a crush on you but he is unsure of whether or not you have one on him.

This could mean that he wanted to hold your hand to see how you would react.

It’s also likely that he would show numerous signals of attraction when he is around you.

He’s mirroring your own behavior

When a person is trying to fit in with a certain group of people he/she will often mirror the body language signals shown by other people in the group.

If you both tend to hang out with the same people and you have touched his hands in the past then it could be that he is mirroring your own behavior.

Mirroring can also be a sign of attraction. If he was doing it because he is attracted to you then he would likely show a number of other body language signals of attraction mentioned in the first section.

If he was mirroring you holding his hands then it would be likely that he would also mirror other aspects of your body language.

Other examples of mirroring can include:

He wants to be in a relationship

It could be the case that he did it because either he wants to be in a relationship with you or he might even think that you already are.

If that is why he did it then it would be likely that you have been dating him for a while.

If you think that he might have done it for one of those two reasons and you don’t actually want a relationship then it might be a good idea to talk to him about it now.

Consider when and where he does it

When trying to make sense of why he wanted to hold your hand it would be helpful to think about when and where he did it.

If he did it when you were both alone together then it would make it more likely that he is attracted to you.

Consider how tightly he holds it

Another thing to think about would be how tightly he held your hand.

If he held it tightly then it would be more likely that he was trying to protect you and to lead you out of a certain situation.

Whereas if it was with a normal grip then it would make it more likely that he was trying to be more intimate with you and that he finds you attractive.

If you notice that he tends to hold other women’s hands and his body language doesn’t change when he does it with you then it would suggest that it’s normal for him. Although, that would be highly unusual in Western society.

Whereas if he doesn’t seem to do it much with other women and his body language changes when he’s around you then it would be a much stronger indicator that he finds you attractive.

What does it mean when a guy wants to hold your hand and you’re not dating? It would be likely that he finds you attractive and that he wants to either have a relationship with you or to start dating you. It might also be that he was trying to console you or to protect you. It would be helpful to consider other body language signals that he shows when he is around you.

Do guys act weird around you when they like you? 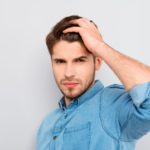 What does it mean when a guy runs his fingers through his hair?