If a guy recently touched you on your waist you’re probably wondering why he did it.

This post will try to help you figure out why he did it and to make sense of it as it happens in the future.

So, what does it mean when a guy touches your waist? It would likely be a sign that he is attracted to you especially if he only touches your waist, he does it on more than one occasion and if he shows other signs of attraction around you. He might also be being dominant, protective or he might be trying to tease you.

Since there are a number of reasons why a guy will touch your waist it is important to consider the body language signs that he shows and the context of how he did it.

By doing so you’ll be able to get a better understanding of the reason that he touched your waist.

Reasons why a guy will touch your waist

Each of the different reasons why a guy will touch your waist will come with a number of clues in his body language.

Below, I will mention a number of reasons why a guy will touch your waist along with the body language clues to look for.

He was showing attraction

If a guy touches your waist and he doesn’t touch other women then it would be likely that he finds you attractive.

If he does find you attractive then it would be likely that he would show it in a number of other ways that can include:

If he has been your friend for a while then the reason that he touched your waist might be a sign that he wants more than just a friendship.

If it is the case that he wants to be more than just friends it would be likely that he would show numerous signs of being attracted to you in his body language.

It would be especially likely that he would get anxious when you’re with other men, show signs of nervousness around you and that he would make plans based on yours.

He wanted to see your reaction

He might have touched your waist because he is attracted to you but he is unsure whether or not you are attracted to him so he wanted to see if you’d react positively.

If that is why he did it then it would, again, be likely that he would show it in his body language and behavior around you.

You should consider if he suddenly does things such as adjusting his clothing or hair, smiles or points his feet towards you when he first notices you.

He was being dominant

The reason that he touched you might be because he was showing dominant behavior.

This would be more likely to be the reason if he did it in a public setting where there was not an environmental reason for him to touch you such as to stop you from falling.

If he was being dominant then it would be likely that he would also show other signs of it in his body language.

He was being protective

It could be the case that he touched your waist because he was trying to protect you in some way.

Alternatively, he might have done it in a moment where there was uncertainty such as when walking through a crowd.

If he did touch your waist in these scenarios then it wouldn’t suggest anything other than that he was trying to help you.

Consider how he interacts with others

When trying to figure out why he touched you on the waist it would be helpful to consider how he interacts with others.

If you notice that he touches other women a lot and he doesn’t change his body language when he notices you then it would suggest that it’s more of a personality trait that he has where he touches people a lot. It could signal that he is a dominant character so it would be necessary to consider his other behavioral and body language signals.

Whereas, if he does change his body language around you and he doesn’t seem to touch other women much at all then it would be more likely that he did it due to being attracted to you. However, it would still be necessary for you to consider the other signals that he was showing.

Consider when and where he did it

The timing and location of when he did it would also likely help you in figuring out why he touched your waist.

If he did it when you were about to injure yourself then it would simply suggest that he was trying to protect you.

Whereas, if he did it when you were both alone together and his body language changed when he did it then it would be more likely that he did it due to being attracted to you.

If it was in an environment where there were other people watching then it would be more likely that he was trying to show his status in the group. In this case, it would be helpful to consider the way that he was interacting with others to figure out why he did it.

It would also be helpful to think about the type of relationship that you have with him when trying to figure out why he did it.

If you have been dating him for a while then it could have been a sign that he wants to bring the relationship to a more intimate stage.

Whereas, if he has been your friend for a while then he might have touched your waist because he wanted more than to just be friends.

If you hadn’t met him before then it would be more likely that he had a dominating personality, that he was showing attraction to you or both.

When trying to figure out why he might have touched you on the waist it would be helpful to think about groups of body language signals at a time.

There are usually a number of different reasons that a person might be showing one particular signal. This means that drawing conclusions on why a guy might have done something based on one body language signal is often unreliable.

What does it mean when a guy touches your ear? 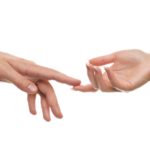 What does it mean when a guy touches your hand?