If you have recently noticed a guy touch your back you’re probably wondering why he did it and what it might mean.

This post will try to help you figure out why he might have done it and to make sense of it as it happens in the future.

So, what does it mean when a guy touches your back? Possible causes of a guy touching your back are that he is attracted to you, he is consoling you, being protective, seeing how you react to it or mirroring your own behavior.

Since there are a number of reasons why a guy might touch your back it is important to consider the other body language signals that he was showing.

By doing so you’ll be able to get a better idea of the motivations behind why he did it.

Possible reasons why a guy will touch your back

Each of the different reasons why a guy might touch your back will likely come with a number of different clues in his body language.

Below, I will mention a number of reasons why a guy will touch your back along with the body language signals to look for.

He might have touched your back because he is attracted to you.

If that is the case, he would likely show a number of other signals of attraction in his body language when he is with you.

When people are trying to make it apparent that they are the dominant person in a group they will often touch other people in the group.

If he touched you on the back when telling you to do something or when making a statement aimed at you then it would make it more likely that he was being dominant.

It could be the case that he is both dominant towards you and attracted to you. If that is the case then he would likely show a number of the signs of attraction mentioned above in addition to showing some of the dominance signals mentioned below.

If he was being dominant then it would be likely that he would show other signs of dominating behavior such as:

Often, when people are trying to make other people feel better, they will put their arms around their back.

If you were sad at the time and you were showing signs of being sad in your body language it would make it more likely that this is why he did it. It would also be more likely if he wrapped his arm around your back.

He’s trying to get you to move

Sometimes people will tap them on the back in order to get them to move.

If he was trying to go somewhere and he went somewhere else as soon as he touched your back then it would make it more likely that it’s why he did it.

Another reason that someone might touch your back is that they are trying to get your attention. If he touched your back from behind and he immediately started talking to you then it would be more likely that this is why he did it.

Sometimes men will put their arms around a women’s back when they are trying to be protective.

This would be more likely to be the case if he is your boyfriend. However, if he isn’t then it would be a more sexual signal if he was to do it when sitting with you or walking with you.

If you have been friends with him for a while then he might have done it because he wants more than just a friendship with you.

If that is the case then he would likely have been showing a number of the attraction signals mentioned above. However, you might not have noticed them.

If he hasn’t overtly told you that he wants more than just a friendship before then he might be too nervous to. If that is the case then he would likely show signs of being nervous as well when he is around you.

When a person is trying to fit in with a certain group of people he will often begin to mirror a number of their behaviors and body language signals.

If you both tend to hang out with the same people and you have touched him on the back yourself in the past then it could be that he is mirroring your own behavior.

Mirroring can actually be another signal of attraction so if he was mirroring you then it could be the case that he also finds you attractive. If he does then he would likely show a number of the other attraction signals already mentioned.

If he was mirroring you then it would be likely that he would mirror a number of your other behaviors as well.

It might be the case that he is attracted to you but he is unsure of how you feel about him.

This might have caused him to touch your back as a way to see how you would react and to find out whether or not you find him attractive.

When trying to figure out why he touched your back it would be helpful to think about what your relationship with him is like.

If you have been friends with him for a long time but he hasn’t touched your back before then it would make it more likely that he did it because he doesn’t want to just be friends. If you think that is why he did it then consider the other body language signals that he shows when you see him next but don’t make it obvious.

If you haven’t met him before then he might have been trying to get your attention or to move you along but it might also have been due to domination or attraction. It’s important to consider the other body language signals that he showed when he did it.

Consider when and where he did it

Thinking about the timing of when he touched your back and the location of where it happened would likely be helpful as well.

If he touched you on the back while also telling you what to do then it would be likely that he was trying to encourage you to do it but in a more dominating way.

If he did it while you were alone together and while he changed his body language slightly to appear a little bit anxious then it would make it more likely that it was due to attraction.

If he typically touches people when talking to them then it wouldn’t necessarily mean much when he touches your back unless he also shows other different body language signals.

If he doesn’t normally do it then it would make it more likely that he touched your back due to one of the reasons already discussed. 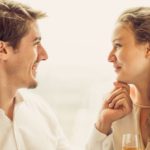 What does it mean when a guy touches your chin?