If a girl has been acting distant lately then you might be wondering why and what it might mean about the way that she feels about you.

This post will show you a number of reasons why she might be acting distant and why other girls might do the same in the future.

So, why would a girl distant herself? It could be that she lost interest in you especially if she also shows signs of disinterest around you. She might also want you to show more interest, she might be seeing someone else or she might not actually be distancing herself from you.

There are actually a number of reasons why a girl might act distant and there are a number of things that you can consider.

Why a girl will act distant

Each of the different reasons why a girl will act distant will likely come with a number of clues in the way that she does it and the body language that she shows.

Below, I will show you a number of reasons why a girl will act distant, the signs to look for and the things to consider.

She is seeing someone else

The reason that she might have started acting distant could be that she is has started seeing someone else.

This would be more likely if she changes the way that she acts around you depending on who else is around, if she avoids hanging out with you at certain times and if she initially was showing interest in you but she suddenly stopped.

The reason that she has been acting distant could be that she is not interested in you or she was but she has since lost interest in you.

If she is not interested in you then she might also show signs of disinterest when she is around you such as:

She wants you to show more interest in her

It could be the case that she is actually interested in you but she either doesn’t want to show it or she might be doing it to get you to chase her more.

If this is the case then it would be likely that you would have shown some interest in her but not a lot and she would likely act differently with you compared to when she is with her other friends.

If she is interested in you then she would still likely show some signs of attraction when she is around you such as:

There are many more signs of attraction that a girl might show and I mention many more of them in this blog post.

She isn’t actually distancing herself

It might be the case that she wasn’t actually acting distant and you’re just imagining it.

If this was the case then it would be likely that she would have been showing the same body language around you that she normally does. She would also likely have been interacting with you in a similar way to how she was interacting with other people.

She doesn’t consider you a friend

It might be the case that she has seemed to be acting distant because she doesn’t actually think that you are her friend.

If this is the case then it would be likely that you would only have spoken to her a few times and that you would not have hung out together in the past.

She was feeling sad

She might have been acting distant because she was feeling sad at the time.

She would also likely have shown signs of being sad such as:

She is annoyed with you

If this was the case then it would be more likely that something would have happened to make her be annoyed with you and she would likely have only acted distant around you.

She would also have likely shown signs of being annoyed with you such as:

Consider how she reacts to seeing you

When trying to figure out why she acts distant around you it would help to consider the way that she reacts to seeing you.

If she reacts to seeing you by noticeably changing her body language then it would make it more likely that she has good or bad feelings about you.

If she reacts to seeing you by doing things such as:

It would make it more likely that she is actually interested in you.

Whereas, if she reacts by doing things such as:

Then it would be more likely that she has negative feelings towards you.

Consider how she interacts with her other friends

If she also interacts with her other friends similarly and she shows the same body language around them then it would make it more likely that she either does it naturally or she was feeling sad when she seemed distant.

If she shows different body language around you then it would be more likely that she has good or bad feelings about you depending on how her body language changes.

When considering what her body language could be showing it would help to look for a number of signs.

Whereas, if she shows multiple body language signs that all suggest the same thing then it would be more likely that she is showing them for that reason. 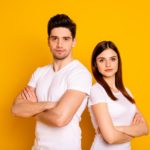 Why would a girl say yes to a date? 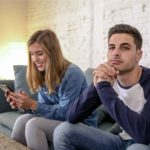