If you have recently noticed a man speaking at a higher pitch then you might be wondering why and what it might mean.

This post will try to help you figure that out and to help you to make sense of it as it happens in the future.

Since there are a number of reasons that a man’s voice might get higher it is important to consider the other body language signals that they are showing.

Each of the different reasons that someone might speak at a higher pitch will likely come with a different set of body language signals. They will likely help you a lot in figuring out why he is doing it.

Possible reasons why a man might speak at a higher pitch

Below, I will mention a number of reasons why a man’s voice might get higher along with the body language signals that you should look for.

One reason that a man’s voice might get higher temporarily is that he is talking to someone that he finds attractive.

It is known that men will often speak with a deeper voice around women they find attractive since it shows that they have testosterone.

However, studies have also found that men will speak at a higher pitch as well when speaking to a woman that they find attractive.

This means that when a man is speaking to an attractive woman he will often vary his vocal tone between deep and high.

The reason for this is likely to be because they want to show their masculinity while also being able to show that they are not a threat.

So, If you notice that a man has been varying his vocal tone around you it could mean that he finds you attractive.

If it is due to attraction then it would be likely that he shows other signs of attraction in his body language.

One reason that a man might begin to speak at a higher pitch is that his voice might actually be converging to the pitch of people that he spends most of his time with.

It has actually been shown that, over time, people will begin to change their vocal tone to sound more like the people that they spend most of their time with. It was also found that it will converge mainly to the person that they like the most.

This means that if you notice a man’s voice getting higher over a period of weeks and months then it could be because he’s living or spending a lot of time around people that speak at a higher pitch.

If he is mirroring their voices then it would also be likely that he would begin to mirror other behaviors.

The reason that the man might speak at a higher pitch could be because he is nervous.

If this is the case then he would have likely changed his pitch at around the same time that something happened that could make him nervous.

It could have been that the man was asked a question that was emotional for him, or that he was waiting to see his exam results.

If he is nervous then he would likely show other signs in his body language such as:

When someone is trying to intimidate someone else they will do so by talking with a deeper voice.

If the other person speaks in a deeper voice in kind then it could be considered as an act of aggression.

As a result of this, when people are being intimidated they will often speak at a higher pitch in order to show that they are not a threat.

If you notice a man speaking at a higher pitch then it could be that he is feeling threatened and that he wants to avoid trouble.

If this is the case then it would likely be apparent based on the context but one example could be if another man is around that he feels intimidated by.

If the man is being submissive he will likely show other signals in his body language such as:

Why men speak at certain pitches

It is actually the case that the type of man that a man thinks he is and his supposed place in society can actually impact how he speaks.

the man thinks that he is dominant it has been shown that he will generally speak at a lower pitch.

Whereas, if he considers himself as high status he will not change the pitch that he speaks at regardless of how he is talking to. He can speak at a high or low pitch but the key finding is that it won’t change.

When trying to figure out why a man might be speaking at a higher pitch it would help to consider what their normal behavior looks like.

If a man typically speaks at a high pitch then it could just be that he is designed to speak that way.

Whereas if a man typically speaks more deeply and he suddenly starts speaking at a higher pitch then it would suggest that something is causing him to change the tone of his voice. In this case, you should look to see what other aspects of his body language are different to see why.

It would also be helpful to watch how they behave around others since it might be that they are attracted to you or intimidated by you which could be causing him to speak differently.

Think about when it started to happen

Considering other things that happened at around the time that the man started to speak at a higher pitch would also be helpful.

If it was when another man entered then it could be that he is feeling intimidated by him or it might be that he is mirroring the other man’s pitch.

Think about where it happened

Considering the location that it occurred in would also be helpful.

If it happened in a business setting then it would be because he doesn’t want to give the impression that he is a threat to people higher up in the company.

What causes a man’s voice to be high pitched? It could be that he is genetically designed to speak at a higher pitch. Alternatively, he could be mirroring those around him, attracted to someone, being submissive, nervous or appear less confrontational. 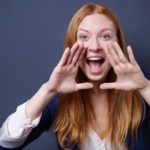 What it means when your voice gets higher

What does it mean when a guy’s voice gets higher?