If you have recently noticed a guy touch the small of your back you’re probably wondering why he did it and what it might mean.

This post will try to help you figure that out and to help you to make sense of it as it happens in the future.

Since there are a number of reasons why a guy might touch the small of your back it is important to consider the body language signals that he was showing when he did it and the signals he shows when he’s with you.

By doing so you’ll be able to get a better idea of the motivations that he had behind doing it.

Each of the different reasons why a guy might touch the small of your back will come with a number of different body language signals.

Below, I will mention a number of reasons why a guy might do it along with the body language signals to look for.

If a guy touches the small of your back it will often be a strong signal that he finds you attractive.

If he does find you attractive he will likely show it with his body language in a number of ways.

Some of the body language signals that he might show include:

When people are trying to show they’re more powerful than others socially they will often touch other people in the group.

By doing this they are showing that they are not concerned about you as a threat.

This could be the reason that he did it to you.

He wants to be more than friends

It could be the case that he has been your friend for a while and he touched the small of your back because he wants more than just to be friends with you.

If that is why he did it then it would be likely that he would have been showing signs of attraction around you that you haven’t picked up on.

Since he hasn’t overtly told you that he finds you attractive yet then it would also be likely that he would show signs of nervousness when he is around you.

It could also have been the case that he finds you attractive but he is unsure of whether or not you are into him.

If this is the case then it would also be likely that he shows many of the signals of attraction mentioned above when he is around you.

He also might have appeared to have had an observant body language when he touched the small of your back.

He’s trying to cheer you up

People will often put one of their arms around the back of someone when they are trying to cheer the person up.

If you were sad at the time and you were showing signs of being sad in your body language then it would be more likely that he did it to try and cheer you up.

If he was then it would also be more likely if he put his arm around your lower back or sometimes people might rub your back instead.

Another reason that a man might put his arm around the small of your back is if he is trying to be protective.

This would be more likely to be the case if he did it when you were both in an uncertain situation. For example, he might have done it while you were both walking through a crowd.

When people are trying to fit in with another group of people they will actually mirror their body language.

If you have touched the small of his back before and you both hang out with the same people then it would be more likely that he was mirroring you.

Mirroring can also be a signal of attraction so you should also observe to see if he is also showing attraction signals.

If he was mirroring you then it would be likely that he would mirror a number of other of your behaviors as well.

When trying to figure out what a guy’s body language might be suggesting it is important to consider what his normal body language looks like.

If he normally touches other people when he’s with them then it would not be as strong of a signal that he did it for any particular reason when he did it to you. That is unless he was showing multiple body language signals that suggest otherwise. If he tends to touch people when talking to them then it might suggest that they are high status, dominant or overly friendly.

If he wouldn’t normally touch other people then it would make it much more likely that he touched the small of your back for one of the reasons already mentioned. You should consider the other body language signals that he was showing when he did it to figure out which reason it was.

The location and the timing of when he touched the small of your back would also be something to consider.

If he did it when you were both alone together and he perhaps went slightly anxious when he did it then it would suggest that he did it due to being attracted to you.

If it was in a social setting then it could have been to show you that he’s attracted to you and that he doesn’t want to be friends but it could also have been a public display of dominating behavior or he might have been trying to be protective if it was in an uncertain environment.

The type of relationship that you have with him would also be something that would be worthwhile to consider.

If you have been dating him for a while then it could be the case that he did it because he was trying to further the relationship on a physical level.

If it was a guy that you have never met before then it would make it more likely that he either did it due to being dominant or he might have been trying to show attraction to you or both.

What does it mean if a guy touches your lower back? 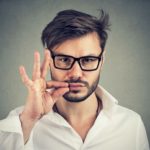 What does it mean when a guy is quiet around you?