There are actually a lot of things that you need to consider when trying to figure out why someone might have suddenly looked away. Their body language will likely have shown a number of other clues and the setting and your relationship with the person may help as well.

Why someone might look at you then look away

They were checking you out

One reason a person might look at you and then suddenly look away is that they were checking you out and you caught them in the act.

In this case, they were probably a bit shy and didn’t want you to notice that they were looking at you.

This type of behavior will also likely come with a number of other body language signs.

People don’t often think about looking at the lower body when trying to figure out what a person might be thinking but it is actually one of the most honest body parts to look at. People learn ways to control their upper body’s in order to hide their emotions but they rarely think about what they might be doing with their lower body’s.

If they were checking you out then it is likely that they were pointing their feet in your direction. This is because we typically point our feet where we want to go or towards people that we like or find attractive.

Another thing that you might notice that they do when they’re around you is that they tend to point their toes upwards. This is generally a positive behavior that can signal that they are happy around you.

You may notice that the person tends to smile around you more and they will tend to laugh more at your jokes. The smiles that they give you when they see you will also be genuine smiles where they crease slightly beside their eyes and they will open the mouth as well.

If they are attracted to you then you’ll likely find that they touch you more often than others. They might also look for excuses to touch you.

When people are nervous it can cause them to speak in a higher pitch. If the person gets nervous around you then you’ll likely find that their voice goes higher than normal. However, if it’s a man then he may actually speak more deeply since men do that when they’re with a woman that he finds attractive.

If the person looked at you then looked away due to attraction then you will probably notice that they hold their gaze with you for longer when they are talking to you. This is because when we become attracted to people we begin to engage in mutual gazing where we look into their eyes for longer.

Another thing that you’ll probably notice is that they might be giving more glances in your direction.

Additionally, when we are happy or when we are aroused it causes our eyes to dilate slightly. This means that if the person is attracted to you then you might notice that their pupils tend to be more dilated when they’re with you.

If the person that was looking at you was a woman and it was due to attraction then you’ll likely find that she tends to touch you more frequently, tries to talk to you more, plays with her hair with her palms facing you, she may sweep her hair to the side when talking to you and she might dangle a shoe on her foot when talking to you.

If it was a man then he’ll probably speak more deeply around you, hold eye contact with you for longer, glance your way more often, have pupil dilation around you, point his feet in your direction and he probably tries to talk to you more than others.

If the person was looking at you and then they looked down then that would typically be a submissive behavior.

If this is was the case then it could have been due to being slightly nervous but they like you which would be more likely to be the case if you’re a man and she’s a woman. Or it may be because they felt threatened and wanted to leave.

If they looked down it would be important to look at other behaviors that they showed in order to figure out why they did it.

If they showed positive behaviors like pointing their feet at you, leaning towards you, giving genuine smiles or pupil dilation then it may have just been that they were nervous but didn’t want to leave.

If they showed the opposite behaviors where their pupils were constricted, they were looking away often, they were pointing their feet away, was giving non-genuine smiles or they leaned away from you then it would suggest that they wanted to leave.

One reason that they might have been staring at you and then suddenly looked away when you saw them was that they were mad at you.

If this was the case then it would likely be that something recently happened that might have caused them to be mad.

They would also have been showing some negative body language signals such as pointing feet away from you, squinting at the eyes, frowning, jaw tension, tight lips, pupil constriction and they would be less likely to show you their palms.

When trying to figure out why someone might have been staring at you and then looked away it would be helpful to consider the setting that you were in.

If it was in a social environment and the person was the opposite sex then it would be more likely to be have been due to them checking you out.

Consider your relationship with the person

It would also be beneficial to think about what type of relationship you have with the person that looked away.

Whereas if the person was your boss then it may have simply been that they were thinking about you and looking at you at the same time or they might have actually been mad at you.

When trying to figure out why someone might have looked away it can be beneficial to consider their baseline behavior.

This is because someone might tend to do certain things that might be considered a positive or negative body language signal but because it’s what they normally do it actually wouldn’t necessarily suggest either.

It also helps to understand what a person’s baseline behavior is because when they deviate from it you will be able to infer that something must be causing them to change their behavior. Then you can figure out how they are feeling based on whether or not the new behavior was positive or negative.

Look at their body language

When trying to figure out why someone might have looked away it would be very helpful to consider what other aspects of their body language was saying. It’s important not to take single pieces of body language as fact and instead to think about clusters of body language.

Were they showing positive signals?

If the person was looking at you for a positive reason then it would likely be the case that they were also showing positive body language. This means that they would have been more likely to glance in your direction more often, gaze at you for longer, lean in when talking to you, stand closer to you, point their lower body towards you, ask you more questions, look at you when laughing, have pupil dilation, touch you more, show their palms to you or give you genuine smiles.

Are they showing negative signals?

If the person was looking at you for a negative reason then they were probably showing other negative body language signals. This means that they were likely would have been more likely to distance themselves from you, have pupil constriction, face their lower body away from you, not show you their palms, tense their jaw, give half-smiles where they keep their lips closed, not touch you and may have been tapping one of their feet signaling that they wanted to leave.

What does it mean when someone stares at you a lot? If someone tends to stare at you a lot it can be a sign that they like you or that they find you attractive. 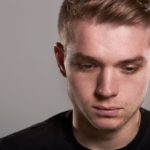 What does it mean when someone looks down? 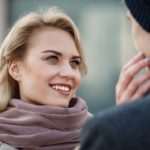