If you have recently noticed a guy touching your hair you’re probably wondering why he did it and what it might mean.

This post will try to help you figure out why a guy might touch your hair and to make sense of it as it happens in the future.

So, what does it mean when a guy touches your hair? Possible causes of a guy touching your hair are that he is attracted to you, he’s being dominating, he’s trying to calm you down, he likes how it looks or that he’s from a culture where it’s a normal thing to do.

Since there are a number of reasons why a guy might touch your hair it is important to consider the body language that he shows.

By doing so you will be able to get a better idea of the motivations behind what he is doing.

Each of the different reasons why a guy might touch your hair will likely come with a number of clues in his body language.

Below, I will mention a number of reasons why a guy might touch your hair along with the body language signals to look for.

It could be the case that he touched your hair because he is attracted to you.

If that is the case then he would likely also show a number of other signals of attraction in his body language.

If he did do it due to attraction it would be less likely that he tends to touch other women’s hair (unless he’s attracted to them as well). This means that you should consider whether or not you have noticed him touching other women’s hair.

When he did touch your hair would likely have felt quite contrived since he was just looking for an excuse to touch it.

When people are behaving in a dominating way they will often touch other people.

If this was the case then it would be likely that he would likely show other dominating behaviors.

He’s trying to calm you down

If you were talking to him about something that makes you feel sad and you were showing body language signals of being said then it might be that he was trying to console you.

However, if that was the case, he would be more likely to put his arm on your shoulder instead.

He likes how it looks

The reason that he touched your hair could be that he likes the way that it looks and he wants to see how it feels.

In this case, it would be likely that he also finds you attractive so he would also likely show a number of other body language signals of attraction.

He’s from a different culture

It could be the case that he is from a culture where it is normal to touch people when talking to them.

In this case, his body language would likely appear to be more neutral to you unless he also finds you attractive or he has a dominant personality.

The location that he touched your hair in would likely be something that would help you in figuring out why he did it.

If it was at a party then it would make it more likely that he finds you attractive. However, he might have been trying to get you to lighten up.

If it was in a business setting then it would make it more likely that he was behaving in a dominating way. However, he still might have done it due to attraction which is why it’s important to consider the body language signals that he shows.

Consider when it happens

The timing of when he did it would also likely be a useful thing to consider when trying to understand why he did it.

If he did it when his vocal tone went a bit softer it would indicate that he was doing it due to attraction.

If he did it at the same time as telling you what to do it would be more likely that he .

Watch how he interacts with others

Observing how he interacts around other people would likely be helpful in determining why he did it.

If he tends to touch other people it wouldn’t be as strong of a signal of attraction when he touches you. But, it might be that he does find you attractive so he would likely show a number of other body language signals of attraction.

If he does tend to touch other people it could be a sign that he has a slightly more dominating personality so you should consider if he shows other signs of domination when with you and others.

If he doesn’t tend to touch other people then it would be a stronger signal of attraction when he touches you.

Why does he play with my hair? If a guy plays with your hair it would generally be a sign of attraction. If you think it is then you should consider if he also shows other signs of attraction in his body language. 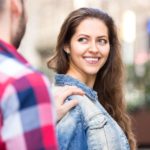 What it means when a guy touches your shoulder

What does it mean when a guy touches your thigh?