It can be an awkward feeling when someone looks down while talking to them. This post will try to help you to figure out why they might do it and what it might mean.

So, what does it mean when someone looks down? If someone looks down while you are looking at them in the eye then it would typically be a submissive gesture. Looking down can also signal that the person is feeling anxious, uncomfortable and may indicate that they’re lying.

There is actually a lot that can go into figuring out what might have caused a person to look down. It can also help you a lot in figuring out how someone feels about you.

How to figure out what it means when someone looks down

Think about what their baseline behavior is

Before you judge a person’s feelings based on their body language it can be helpful to figure out what their baseline body language looks like.

If a person generally has a timid personality then looking down won’t necessarily mean that they are uncomfortable around you or that they are feeling anxious at that moment.

However, if a person doesn’t normally look down when talking to people then if they do look down it would be a more honest signal that they are feeling submissive or uncomfortable for some reason.

Another sign that might go with looking down could be eye blocking behavior. This is where someone is making the person feel uncomfortable so they do things to avoid looking at that person.

Eye blocking behaviors can involve more frequent blinking, eye rubbing, or putting something in the way.

If they are also pointing their feet towards the exit and if they are frequently looking away then it could suggest that they do not feel comfortable around you.

Consider the size of the pupils

If someone looks down while you are talking to them and you notice that their pupils are more constricted than usual then it would suggest that they are feeling anxious. In this case, you should look for other signs of feeling uncomfortable. These can include rubbing the neck, face, legs or arms, pointing their feet away from you and tapping one of their feet.

Listen to their voice

When feeling uncomfortable or submissive it can cause us to talk with a higher pitch voice. If the person that looks down is talking with a higher-pitched voice than usual then it would suggest that they are feeling submissive.

It can also help to consider the environment that you’re in.

If it’s in a business setting and the person is in a lower position than you then it would suggest that they are submitting to your authority.

Consider who else is present

Another thing to consider is that it might not actually be you that is causing them to be submissive.

If you’re talking to a child and their parents are around then it may be that they are behaving that way because it’s what their parents expect them to behave like.

If you’re in a more social setting and a person is looking down a lot then it could be that someone else is making them feel submissive or uncomfortable. In this case, they will likely not be adding much to the conversation, they will point their feet away from whoever they don’t like, they will show eye blocking behaviors around the person they don’t like, and they will be doing pacifying things like rubbing their arms, neck, face or legs.

Think about your relationship with the person

Another thing that will help you to figure out why the person may have looked down is to consider your relationship with the person.

If you’re in a position of perceived authority over the person such is if you’re their boss or they’re a lot younger than you then it would be more likely to suggest that it was a submissive gesture.

If the person that looked down is your friend then it would suggest that they might be feeling anxious. In this case, it would help to look for other rs that may signal that is how they’re feeling.

Consider other signals being given off by their body language

It’s important not to draw conclusions based on single body language signals so you should make sure to observe other behaviors that they might be showing.

Below, I will mention a few body language signals that you can look for in addition to those that I have mentioned already.

If the person that looked down also was trying to distance themselves from you then that would suggest that you were making them feel uncomfortable.

If the person wasn’t giving genuine smiles where they show their teeth and crease at the sides of the eyes then that would also suggest that they were not feeling comfortable or that they were being submissive.

If the person was feeling anxious then you may have been able to notice tension above the forehead. They may have also have squinted inwards with their eyebrows.

If the person was feeling really uncomfortable around you then you might also have been able to notice quivering under the eyes or around the chin.

Sometimes, when people are nervous, it can cause them to hold their breath. If the person was taking in abnormally large breathes when they were speaking to you then that would suggest that they were feeling anxious.

Another sign that they might have been feeling anxious would be if they had a dry mouth.

Depends on the culture

In certain cultures, it is considered disrespectful to hold eye contact with someone while talking to them. If the person that looked down is from one of these cultures then it may have actually have been a sign of respect and not submission.

Why you should try to avoid looking down

It would likely be helpful for you to try to avoid looking down when you are talking to people. That is unless you’re in a dispute that you want to calm down by showing submissive gestures like looking down.

By avoiding looking down when you’re talking to people you will be able to subconsciously convey that you are of an equal or higher status than they are. This can be helpful since it will help you to avoid having them trying to take advantage of you since they won’t feel like they are in a position of authority over you.

What does it mean when someone looks at your lips? 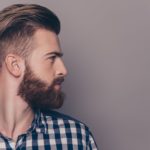 What it means if someone looks at you then looks away