If you have recently noticed someone hiding their hands you may be wondering why and what it might mean. This post will try to help you figure that out and to help you to figure it out in real-time in the future.

To understand why someone might be hiding their hands it would be important to consider other body language signals that they are showing. It would also be helpful to consider when it happened, what their normal behavior looks like and where it happened.

There are a number of reasons that someone might hide their hands and each of them would likely come with other body language clues.

If this is the case, then they would likely have hidden their hands when at around the time that they lied.

If you think that they might have hidden their hands due to lying you should ask them about other things and then ask them a related question again later. If they hide their hands again then it would suggest that the topic is causing them to have an emotional response.

If they are lying then there would likely be a number of other signs that they would show that would be very similar to the signs of nervousness.

Some body language clues to look for would be:

The reason that they might be hiding their hands could be due to nervousness. They might do this by sitting on their hands, holding them behind their back or putting them in their pockets.

If they are doing it due to being nervous then they might have done it as soon as they entered the room due to having some social anxiety.

Alternatively, they might have done it when someone else entered the room and hiding the hands would indicate that they had an emotional response to that.

If they are hiding their hands due to nervousness then they will again likely show a number of other body language signals.

Some of these body language signals might be similar to the signals of lying which is why it’s important to consider the context and if you do think that they’re lying to get them to clarify what they’re talking about so that you can observe their body language again.

Some examples of nervous body language would include:

The reason that standing with the hands behind the back can imply confidence is that it causes them to show their vulnerable areas which suggest that they are not concerned about an imminent threat.

If they are feeling confident then it would be likely that they would show other signs of confident body language as follows:

If this is the case then they would likely be sitting on them or hiding them behind their back while also holding them more tightly.

This type of body language would be more likely to come right after something happened that might cause them to want to restrain themselves.

If this is the case then they would likely show body language signs signaling restraint as follows:

Depends largely on the way that they hide their hands

As mentioned already there are a number of different reasons that someone might hide their hands. However, the way that they hide their hands will likely also give you some clues as to why they did it.

If they hide them behind their back but they are clenching them tightly then it would suggest that they are restraining themselves due to frustration.

Think about when they did it

The timing of when they hid their hands would also likely be of a lot of use to you.

If they hid their hands right after something was said then it would suggest that they had an emotional response to what was said.

If they did it when someone entered the room then they might be scared of them, or even attracted since it could mean that they are doing it to restrain themselves from leaving.

If they did it right from the start then it could imply that something is making them nervous such as social anxiety or that it was due to something that happened earlier.

Compare it to their normal behavior

It would also be helpful to know what their normal behavior looks like.

If they have a habit of hiding their hands then if you see them do it they could be feeling perfectly fine in that moment. However, it could signal that something in the past has caused them to have that habit.

If they rarely do it then it would suggest that something recent has caused it and you should look to see what other body language signals are different.

The location that it happened in would also be something that could help you to understand why it happened.

If they started an interview like that then it would just suggest that they’re feeling nervous about the interview. If they did it half-way through the interview then it could be that a question has caused an emotional response.

If it happened in a social setting then it could be that someone is making them nervous or they might be restraining themselves.

Why you should avoid hiding the hands

If you have a habit of hiding your hands then you should consider stoping that habit.

To many people, hiding the hands is a sign of lying.

In addition, people often look at the hands to understand what you’re saying and to figure out whether or not you’re a threat.

This means that hiding your hands can make people become distrustful of you.

Why do people hide their hands? They might do it because they are nervous or that they are lying. It could also be that they are restraining themselves. 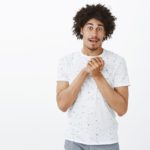 What it means when someone wrings their hands 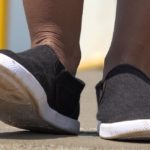 What does it mean if someone taps their feet?