If you recently noticed a guy touch you on the thigh you’re probably wondering why he did it and what it might mean.

This post will give you a number of reasons why a guy might do it and will try to help you to make sense of it in the future.

When trying to figure out why he might have touched you on the thigh it would be beneficial to consider what his body language looks like.

By doing so you will be able to get a better understanding of why he did it.

Possible reasons why a guy will touch you on the thigh

Each of the reasons why a guy might touch you on the thigh will likely come with a number of clues in his body language.

Below, I will mention a number of reasons why a guy might touch you on the thigh along with the body language signals to look for with them.

A probable reason that a guy will touch you on the thigh is that he finds you attractive.

If this is the case then it would be more likely that he would have done it when you were both alone together. It would also likely have seemed more slow and deliberate.

If he does find you attractive then he would likely show a number of other signals of attraction in his body language such as:

He wants to see how you’ll respond

It could be the case that he finds you attractive but he is not sure as to whether or not you find him attractive.

If that is the case then he might have touched you on the thigh to see if you would be welcoming of his advance or not.

If that is why he did it he would likely have seemed quite nervous when he did it and he likely would have appeared to have had an observant appearance since he was judging your reaction.

Another sign that this is why he did it would be if he asked your friends about what you think of him in the past.

He wants to stop being just friends

Since touching the thigh is something that friends don’t do it could be the case that he wants to show you that he doesn’t just want to be your friend.

It could also be the case that it was a dominating gesture.

If he was being dominating then he would likely show other signs of dominating behavior in his body language such as:

As unlikely as it might seem it could have been the case that it was accidental.

If it was accidental he would have likely pulled his hand away straight away and it would have been more of a quick movement.

It would also be more likely to have been accidental if he did it with his legs since he might not have realized he was actually touching you.

Consider how he did it

When trying to figure out why he touched your thigh it would be helpful to consider the way in which he did it.

If he did it with his legs or he did it with his hand but he moved it away quickly then it would make it more likely to have been accidental. However, you should also consider what his body language is like around you to get a better idea.

Think about the timing of when he did it

If he touched your thigh while you were alone together and he did it while also changing the tonality of his voice it would make it more likely to have been due to attraction.

If, on the other hand, he did it while he was sitting down it could have been the case that he just misplaced his hand.

It would also be helpful to consider what your relationship with him is like.

If you have been dating him for a while then it would be likely that he did as a sexual advance especially if you were alone together in a private location.

If it was a person that you haven’t met before then it could have been that it was a sexual advance or that he has a dominating personality or both. 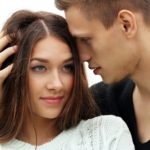 What it means if a guy touches your hair

What does it mean when a guy touches your wrist?