If a guy recently stared at you and smiled you might be wondering why and what it might mean.

In this post, I will try to help you figure that out and to make sense of why a guy might stare and smile at you as it happens in the future.

Since there are a number of reasons why a guy might stare at you and smile it is important to observe other aspects of his body language.

By doing so you will be able to get a better idea of the emotions behind why he did it.

Reasons why a guy might stare at you and smile

There are a number of reasons why a guy might stare at you and smile. Each of them will likely come with a number of key body language signals.

Below, I will mention a number of reasons that a guy might stare at you and smile along with the body language signals to look for.

If a guy stares at you and smiles it would generally be a strong signal of attraction.

If he does it multiple times but doesn’t talk to you then it would be a sign that he is too nervous to approach you. If you want him to then returning the smile back to him should help to get him to do so.

If he did do it due to attraction then it is likely that he would show other signs of being attracted to you.

He’s happy to see you

If a guy stares and smiles at you then it might just be that he is happy to see you.

In this case, it would be much more likely that he is your friend that you have a positive relationship with.

He would likely show a number of body language signals that suggest he is happy when talking to you such as:

Many of these signals are similar to the signals that he might give you if he is attracted to you. However, there are a number of things that he would be less likely to do if he is just pleased to see you as a friend.

If you know him and he did it when he first noticed you then it could just be the case that he was just saying hi.

The signals that you would be less likely to see can include pupil dilation, touching, standing near you, pointing his feet towards you, gazing and getting anxious when you’re with other men.

When people like each other either due to attraction or just because they are friends they will often mirror each other’s behavior.

If you have recently stared and smiled at him then it could be that he was mirroring your behavior.

If he was mirroring your behavior then he would also be likely to mirror other behaviors of yours.

If he was looking at you then he smiled and looked down when you looked at him then it would suggest that he was being submissive.

If you have never spoken to him before then it would suggest that he finds you attractive but he is too nervous to talk to you.

If this was the case then he might also make his body appear smaller, rub the face, neck, arms or legs, gulp or show his palms and neck.

When thinking about why he might have looked at you and smiled it would be helpful to think about the location that it happened in.

If it was in a social setting and you haven’t met him before then it would be a strong indication that he was attracted to you.

If he did it in a setting where it wasn’t feasible for him to talk to you then it could have been that he was just saying “hi” especially if he’s your friend.

It would also be helpful to consider what his normal behavior looks like.

If he tends to smile a lot when he is with his friends then it could just be that he naturally smiles when he makes eye contact with people.

Even if he regularly smiles it could still be the case that he finds you attractive which is why it would be necessary for you to observe other aspects of his body language that might appear to be different.

Whereas, if he rarely smiles at people, it would be a stronger indicator that he smiled at you due to attraction. Even in this case, it would still be helpful to look for other signs of attraction in his body language.

Think about your history with him

If you both tend to get along well with each other and you both laugh regularly then it would be more likely that he was just happy to see you.

Whereas, if there tends to be some tension between you both when you’re talking to each other, then it would be more likely that he stared and smiled due to attraction.

Think about when he smiled

The timing of when he did it would also be of use to you.

If he did it when you both caught eye contact with each other then it would more strongly suggest that he did it due to being attracted to you.

What does it mean if a guy stares at you from a distance? This could be because he finds you attractive but it might also be that he was thinking or even that he was mad at you. 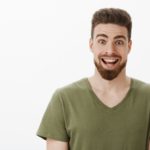 What does it mean when a guy stares at you from a distance?