If you have recently noticed that a guy tends to be quiet around you then you’re probably wondering why and what it might mean.

This post will try to help you figure out why a guy might be quiet around you and to make sense of it as it happens in the future.

So, what does it mean if a guy is quiet around you? Possible causes of a guy being quiet around you are that he finds you attractive and he is nervous, he doesn’t like you, he is naturally quiet, or he might not like the people you hang out with.

Since there are a number of reasons why a guy might be quiet around you it is important to consider the timing of when he is quiet and the body language that he shows when he is quiet.

By doing so you will be able to get a better idea of the motivations behind why he does it.

Why he is quiet around you

Each of the different reasons why a guy might be quiet around you will likely come with a number of different clues in his body language.

Below, I will mention a number of reasons why he might be quiet around you and the body language signals to look for with them.

It could be the case that he is attracted to you and that it makes him nervous around you.

He might be nervous about saying something that might make you dislike him or he might be unsure of whether or not you are into him.

If he is attracted to you then it would be likely that he would show a number of signs of attraction in his body language and behavior when he is with you.

He’s nervous to make a move

If he is quiet around you then it could be the case that he is attracted to you but he is too nervous to make a move.

If that is the case then the reason that he gets quiet could be that he is trying to force himself to ask you out in his head but he’s too nervous to do so.

If this is the case then he would still likely show a number of the signals of attraction mentioned above but it would also be likely that he would try to make plans with you or mention that he’s not busy when you’re not.

You make him feel uncomfortable

It could actually be the case that you make him get uncomfortable.

It might be that you hang around with people that he doesn’t like, you have an outgoing personality that he’s uncomfortable with or that he doesn’t think that you’ll respect his views.

If you do make him feel uncomfortable then it would be likely that he would show other signs of being uncomfortable in his body language.

It could be the case that he’s not actually being quiet around you rather he doesn’t see you as a friend nor does he intend to become romantically involved with you.

If that is the case then it would be more likely that he tends to treat you in the same way that people would generally treat people that they don’t know very well.

This means that he might say “hi” to you but he probably wouldn’t choose to sit near you and his body language would probably appear to be neutral towards you.

It could be the case that he is quiet in general.

If he is then he likely wouldn’t show many of the signs of discomfort when he’s with you and he would likely be quiet around other people as well.

It could be the case that he actually doesn’t like one of your friends.

If, whenever you hang out with him, you also have another of your friends present then it could be that your friend makes him uncomfortable.

For example, he might point his feet away from your friend, position himself so that he isn’t near your friend, ask you questions but not your friend or avoid eye contact with your friend.

When trying to figure out what a guy’s body language might be suggesting it would be helpful to consider what his normal behavior looks like.

If he talks around other girls

If you notice that he generally talks freely around other girls then it would suggest that he doesn’t talk around you due to attraction, discomfort, being nervous to make a move or that he doesn’t like your friends.

If he is nervous around other girls

Consider when he is quiet

Another useful thing to consider is the timing of when he starts to be quiet.

If he tends to be quiet when a particular person enters then it would make it more likely that he doesn’t like them.

Whereas if he tends to be quiet with you from the start then it’s either in his nature or it could be one of the other reasons mentioned above. It would be important for you to consider his body language to figure out why he does it.

Think about where he tends to become quiet

Another thing that would be helpful to consider is the location that he tends to be quiet in.

If he tends to be quiet when his parents are around then it could be the case that he doesn’t want to get punished for saying something that they don’t like.

If it tends to be when in a certain class then it might be that he doesn’t like some of his classmates.

What does it mean if a guy is nervous around you? If he is visibly nervous around you then it could mean that he either finds you attractive or that he doesn’t like you. It would be necessary for you to consider the body language signals that he shows when he’s around you. 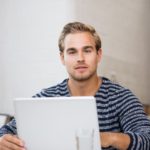 What does it mean if a guy stares at you every day?