If you think that your man recently slept with another woman then you’re probably wondering what signs would he show if he is?

This post will help you figure out if he did it by showing you the signs that you can expect to see if he did.

So, what are some signs that a man slept with another woman?

There are actually a number of other things that could give you some clues as to whether or not he has been sleeping with someone else.

How to tell if he slept with another woman

Consider how he reacts upon seeing you

If he has something to hide then it would be likely that he would have a closed reaction when he initially sees you.

This means that if he crosses his arms and legs, distances himself from you, avoids eye contact, points his feet away from you, shows tight lips, squints when looking at you and avoids talking to you then it would be more likely that he has something to hide.

Whereas, if he initially reacts to you by raising his eyebrows and smiling, uncrossing his arms and legs, holding prolonged eye contact with you, showing more dilated pupils, pointing his feet at you, standing close to you and showing more open looking eyes without squinting then it would suggest that he doesn’t have anything to hide.

When trying to figure out whether or not he slept with another woman it would also be helpful to consider how his body language is different to what it used to be.

If his body language is the same as it used to be and he hasn’t been changing his behavior much from how it usually is then it would be less likely that he has been sleeping with another woman.

Whereas, if his body language is different now especially when he initially sees you and when you’re talking with him about related topics then it would make it more likely that he did it. That is assuming that he shows more negative body language signals and behavior that he didn’t show before.

Look for multiple clues in his body language

This is because he could show a single body language signal for many different reasons which would make it unreliable to draw a conclusion about what he has been doing based on it.

Whereas, if he shows multiple body language signals that all point towards the same thing then it would make it more likely that it is the actual reason that he is showing them.

When you’re trying to observe what his body language is suggesting then it would be necessary to see if he only shows signals of deception when he’s talking about what he’s been doing.

This is because he might have shown the signals by random chance.

Physical signs he is sleeping with someone else? Some physical signs could be that he has a different smell than usual, he has scratches on his body, he might have some hairs that aren’t his on his clothing or he might be sexual less often. If he has been doing it then it wouldn’t necessarily be obvious when you only consider physical signs instead you should also consider changes in his behavior and body language. 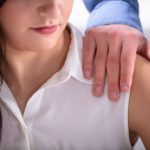 What Does It Mean When A Guy Pats You On The Shoulder?